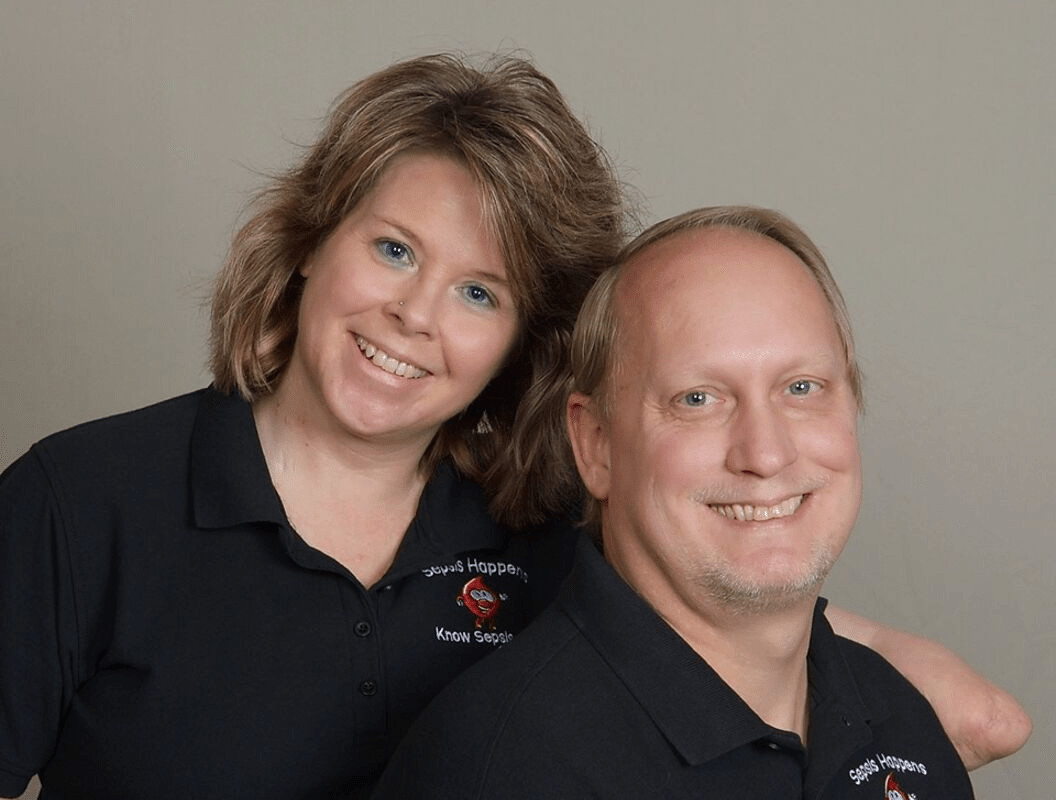 Jay and Sue Stull are true inspirations to us here at the Foundation. After Sue’s battle with sepsis left her a quadruple amputee, they began a quest to raise awareness of sepsis and ensure others were spared their fate. We are proud to present their story.

Jay and Sue were “Living the Dream” in Choctaw, Oklahoma along with their sons, Tyler and Devin, and three dogs (four-legged kids actually), Kia, TJ and Tonka. Jay met Sue in 1999 while stationed at Langley Air Force Base, Virginia and as they say the rest is history. Jay retired from the United States Air Force in 2010 after serving 26 years, including 3 deployments, and they stayed in the local area so Tyler and Devin could finish high school in Choctaw.

Sue was a Circulation Clerk at the Choctaw Public Library, her “dream” job considering she is an avid reader with an out-going personality. She worked there for 18 months before getting ill in August 2014. With the upcoming school year just 2 weeks away, Jay, Sue and Devin went to an afternoon movie and dinner on Sue’s day off. Late evening on Wednesday, August 6, 2014 Sue started experiencing fever/chills, body pain, particularly in her neck, and a sore throat. She continued feeling ill on Thursday, unable to sleep and experiencing restlessness throughout the day and evening. Little did we know that our lives would forever be changed in just a few short days and that this would be the last time we would have a “normal” family outing.

Jay took her to the ER at approximately 1:30 AM on Friday where she was seen in less than 10 minutes. During this examination, Sue’s heart rate was 117, her blood pressure was 91/54, she rated her pain a 9 out of 10, was slightly dehydrated, and had little to no urine output. Although she did not have a fever at the time of this ER visit, she had alternated between chills and a fever of 101.1 to 102.1 during the previous 24 hours, which was reported to the ER staff. After testing negative on a rapid strep throat test, the ER doctor diagnosed Sue with a viral infection and prescribed cough syrup with Codeine…despite showing several symptoms of sepsis and even the onset of severe sepsis, the ER doctor failed to recognize all of these critical red flags and as a result our lives would be changed forever!

On Friday, Sue felt worse on Friday, but the doctor told us she would feel worse before she started feeling better. By Saturday morning, Sue had started experiencing nauseousness and diarrhea, so Jay rushed her back to the ER a second time. Despite excruciating pain and severe weakness, Sue insisted on not using a wheelchair, instead walking into the ER with a tremendous amount of assistance from Jay. Within 5-10 minutes of checking into the ER, Sue walked to the examining room, again with a tremendous amount of assistance from Jay. Unbeknownst to us, this would be the last time Sue would ever walk on her own two feet…

The second ER doctor said he thought Sue had urosepsis from a urinary tract infection and told us she needed to be transported to the ICU. By now, the pain in Sue’s arms was excruciating and her blood pressure was 68/42. Sue was transported to the ICU by ambulance, sirens blaring and lights flashing. Jay went home to pick up Tyler and they headed to the ICU. Sue was receiving broad spectrum IV antibiotics and pain killers, which masked the criticality of her condition and gave us a false sense of security…no one in the ICU told Jay how sick Sue really was. At Sue’s urging, Jay and Tyler left for home shortly after 6:00 PM with strict orders to get something to eat, rent a movie and bring Sue’s Nook on Sunday so she could read.

When he got home, Jay started researching sepsis, high heart rate, low blood pressure, and no urine output and was horrified by what he was reading! The symptoms for septic shock were consistent with what Sue presented, including no urine output and dangerously low blood pressure. The mortality rate for people in septic shock was 40%-70%! How could this be? Sue was in a fight for her life…Jay immediately left to go back to the ICU to be with Sue. He arrived shortly after 9:30 PM and stayed with Sue until 2:30 AM, ensuring she was sleeping soundly before the nurse told him to go home and get some rest.

Jay arrived back at the ICU at approximately 9:00 AM Sunday morning to spend the day with Sue. He was shocked when Sue’s RN quickly pulled him aside and explained that she had crashed and was now on a ventilator. The reality that Sue had at best a 50% chance of survival hit Jay hard, and after spending some time with Sue he began the dreaded process of notifying family. Jay spent the next 30 hours by Sue’s bedside, vowing to not let her be by herself again…he lived in the hospital for pretty much the next 30 days.

Sue and Jay were in an all-out war on sepsis! If Sue was going to survive, this was going to be a 24/7 proposition until further notice. Relying on his military background, Jay established a strict set of rules for Sue’s ICU room. Unless directed by a doctor or nurse to leave the room, Sue was never to be left alone. Negativity and crying were not allowed in her room; if you wanted to cry, that was fine, but do it in the waiting room. Do not wear black-colored clothing in her room as this signifies death, instead wear bright or colorful shirts, or better yet your Team Sue shirt.

After 3 days in the ICU, doctors told us to say our final goodbyes as Sue was given less than a 5% chance of survival…her kidneys had failed, her lungs had failed, her liver had failed, she had a heart attack and 10 ounces of fluid on her left lung. At approximately 7:00 PM on Tuesday, August 12th, Jay told Sue about the infection that was ravaging her body and let her know that if she didn’t want to fight any more she just needed to let him know. Sue shot Jay a dirty look that said loud and clear she wasn’t ready to give up. A few minutes later our prayers for a “miracle of miracles” arrived in the form of an intravenous immunoglobulins (IVIG) treatment. Sue was administered the IVIG treatment Tuesday evening and by Wednesday morning her platelet count had significantly increased and other key blood components showed signs of stabilizing.

Over the next 10 days, Sue’s condition gradually improved, but it became readily apparent that she would require bilateral below-elbow and bilateral below-knee amputations…Sue would be a quadruple amputee! Following her amputations in September 2014, Sue was admitted to the Jim Thorpe Rehabilitation Center Southwest Complex to begin the grueling recovery process. She spent 30 days at Jim Thorpe where her therapists did a phenomenal job re-teaching her how to do the most basic tasks and strengthening her body for the next step in her recovery, the long and arduous process of prosthetic legs and arms.

In mid-November, Sue and Jay headed to the Center for Intrepid in San Antonio TX for physical therapy, occupational therapy, and prosthetics. A dedicated and awesome group of professionals helped jump start Sue’s recovery. On December 10, 2014, less than 3 months after her amputations, Sue walked for the first time on her prosthetic legs! Sue and Jay returned home for the Christmas break and quickly realized that home is where they needed to be. While this was initially a major setback, it soon became obvious there was a different plan in store for us.

In the middle of January 2015, Sue and Jay met with Hanger Clinic to discuss prosthetic care options. Sue started lower extremity prosthetics with Hanger in early February and by May she was walking over a mile around our neighborhood. While Sue has regained her mobility with her prosthetic legs, the upper extremity process would prove significantly more difficult. She completed occupational therapy at Jim Thorpe Northwest Rehabilitation Center in March 2016 and now uses her myoelectric hands as needed for specific tasks. Sue has shown an incredible will to live in beating septic shock and reclaiming her life and independence back has proven that no obstacle is too big to overcome!

We encourage everyone to be an advocate for their own healthcare, to understand the signs and symptoms of sepsis, what constitutes a high heart rate and low blood pressure, and ask questions. If you exhibit the signs of sepsis and don’t feel well, go to the ER, request a blood test, and don’t be afraid to ask if it could be sepsis…

Over the past 5 years, we’ve worked hard to raise sepsis and limb loss awareness, and in 2018 we were honored with a Global Sepsis Award. Along the way we’ve skydived, rode the OKC rapids, swam with manatees, walked in several 5Ks, hiked Gloss State Mountain, and most importantly lived our life!