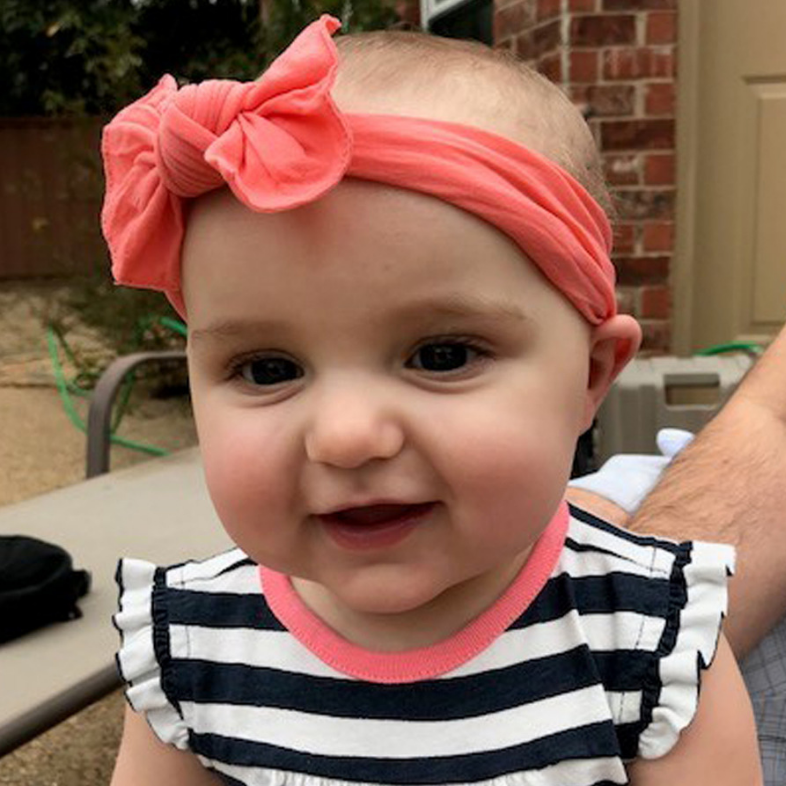 Our beautiful eight-month-old baby girl Stella was a twin to her brother Nash and a little sister to her four-year-old brother Hayden. My husband and I went through eighteen months of fertility treatments until finally we became pregnant with our twins: Nash and Stella. For us, it was a perfect picture. After Hayden was born we wanted him to have a sibling. So, our lovely babies were born on July 8th, 2017. Nash was baby A at 6lbs 13ounces and Stella was baby B at 6lbs 8ounces. From the start Stella was our crier and quite the diva. She was always hungry and we lovingly called her our “bottle alarm”. She was what they call a “happy spitter”. I think she probably went through four costume changes a day; sometimes she came home from daycare in her brother’s clothes.

Our perfect picture began to shatter when we were in Colorado for Spring Break and Nash got a fever. We took him to an Urgent Care Center on Wednesday and because he wasn’t feeling better when we returned to Texas we brought him to his doctor who told us he had an ear infection.

Stella had a fever on Sunday night, we took her to the doctor on Monday and her fever was 102.8. The doctor did a deep suction on her and listened to her chest, did an RSV and flu test and they were both negative. They told me it was viral.

My baby girl was still alert and flapping her little arms in joy. We continued giving her Motrin and Tylenol but by Tuesday she was more lethargic and started throwing up and not wanting to eat and just sleep. We took her again to the Pediatrician on Wednesday when she tested positive for strep. They assured us that she would be lethargic until Friday when her meds kicked in We gave her two dosages on Wednesday and I stayed up with her until 12.30am scared she would aspirate. She fell asleep with me in our bed; my husband was with the boys upstairs,

For some reason I woke up at 4.30am and she was not breathing.

The Medical Examiner told us that Stella had suffered from a bacterial infection, we now know that Group A strep was in our little girls lungs, She had pneumonia and a middle ear infection, We now know that strep got into her bloodstream and turned septic. All of this had gone undetected by our doctor.

We told our Pediatrician 10 things that were wrong with Stella when we brought her to the office and now we know that they were all signs of sepsis but of course we did not know it at the time.

We are devastated. We cannot understand how the doctors did not know the signs of sepsis. Our little baby is in the arms of Jesus and for us this will be a lifelong struggle.